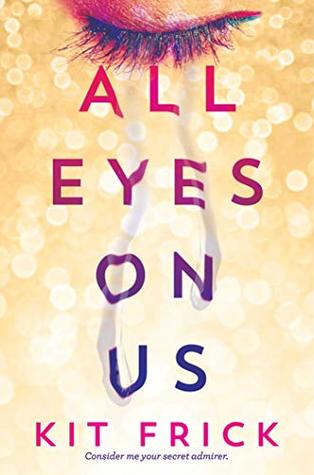 The Bad
– Despite the good, it’s overall just adequate
– Some telling over showing
– Some “feels” in prose at key points
– Switching between calling parents Mom/Dad and Linda/Jack

I’m slipping through the crowd, making eye contact and smiling, when my phone chimes. Instead of the usual message preview, the words Private Number light up the screen. I glance around, then step out of the hall and into the entryway. Perched on the lip of the Shaws’ stone fountain, my red Louboutins flashing against the blue marble floor that looks like the ocean, I open the text.

New Year, New You. Wouldn’t you look better without a cheater on your arm?

Story—★★☆☆☆
Characters—★★★★☆ (3.5 Stars)
Amanda and Rosalie have the same boyfriend. Amanda tolerates Carter’s “bad habit” because she knows he’ll always really be hers. Rosalie uses Carter as a shield to avoid returning to conversion therapy while she really dates Paulina. But someone knows about Carter’s cheating and Rosalie’s girlfriend. Amanda receives texts from a secret admirer demanding she publicly break Carter’s heart. She assumes it’s the other girl, Rosalie, until the threats start pouring into Rosalie’s number: she needs to come clean to Carter about Paulina and record it, or else pictures of her clandestine meetings with Paulina go to her parents.

All Eyes on Us is primarily a thriller. It never strives to excel in the genre or exceed expectations. However, it never falls short of what it promises. So in this regard, it is solid and satisfactory, but never extraordinary.

The one place All Eyes on Us shines is in its character presentation and growth. Chapters switch between first-person narratives of golden girl Amanda Kelly and desperately closeted Rosalie Bell. Amanda is nearly utterly unpleasant at first: who cares about some rich girl with boy trouble? But the reader warms up to her once her stress at home comes to light. Amanda’s once rich parents are struggling behind the scenes to climb back to the top after the recession, she faces pressure from her disillusioned and alcoholic mother—who never gave up their rich lifestyle—to stay together with and eventually marry Carter Shaw. The Shaws have real, reliable money.

On the flip-side, we have Rosalie. Rosalie is instantly a sympathetic character. With working-class roots and an upbringing in the cult-like Followers of Christ branch of Christianity, she is both relatable for her humble origins and easy to feel for in her suffering. She’s dating Carter as a smokescreen, assuring her parents the abusive conversion therapy she endured twice has worked, while dating her real girlfriend, Pauline, in secret. Rosalie hates living a lie but convinces herself the sacrifice is worth it to avoid revealing the more painful truth.

Although the author put an enormous amount of consideration and research into Rosalie’s situation, she does come down a little too hard about her living a lie and suffering sometimes, and it feels a twinge inauthentic in those times. But overall, she wrote a relatable character with a hopeful narrative.

Again, it’s an adequate thriller. It doesn’t grip early enough and although it’s engaging and page-turning in a casual way, it’s never something you’d sacrifice sleep/eating/socializing to finish. The high point is that it feels realistic: the secret admirer never does anything too outlandish or unbelievable, there are multiple smart red herrings along the way, characters never make any poor jumps in logic and when the secret admirer comes to light, their motives are suitably sympathetic but never to the degree the reader would prioritize them over the girls. In the beginning, it does suck a bit at first when it seems like Amanda and Rosalie will be working against one another, but they eventually team up—and in the finale especially—they’re a pretty awesome team.

The setting was, well, adequate. It was more Pennsylvania than not, I suppose and you definitely get a feel for the areas the girls are from and in individual settings. A couple of scenes stood out, but overall, it was functional but not exceptional.

Writing Style—★★★★☆ (3.5 Stars)
The author’s writing style was, again, adequate. It’s readable, both sophisticated and conversational, and genre-appropriate. There are a few instances of telling over showing, but they never bog the book down. Likewise, there are some filter words—mostly feels—at some key points, but they never do any massive damage to the narrative. My biggest complaint in this department is how the author kept switching between calling the girl’s parents by mom/dad/mother/whatever and their given names. In terms of style, it’s something a good editor should’ve caught, and generally, it’s just weird hearing Amanda say Mother in one sentence and Linda in the next. Likewise for Rosalie to say Dad and Mom in one breath and Richard and Julia in the next. Pick one that makes sense for the relationship, please.

Themes and Representation—★★☆☆☆
When it comes to representation, I feel like the author did do a pretty good job of the stuff she did incorporate. Alcoholic parents, parents who place pressure on you, going through a traumatic experience, etc. And I do feel comfortable with how Rosalie’s experience was handled, even if was a bit heavy-handed at times. As much as she’s gone through, her character arc ends on a positive note. I do wish there were more characters of colour involved. Pauline and her family are excellent, but definitely on the sidelines, and Amanda’s friend is Japanese but… not Japanese? As in, it’s great there is an Asian character, but she’s Japanese in name in only—the author could easily control+f “Japanese” and replace it with Russian or Jamaican or Cambodian and nothing would change.

Recommended For…
All Eyes on Us is a decent thriller and nice for a change of pace. But I wouldn’t label it a “must read” or prioritize it. It’s completely fine, but not exceptional.

This site uses Akismet to reduce spam. Learn how your comment data is processed.

🎉🎉🎉
🎉🎉🎉
🎉🎉🎉
(content warning for talking about mental illness and meds. Skip to the last paragraph for cat-related stuff)
Not me trying to slide my February wrap up in before March is over, no, not at all.
Review | House of Rougeaux by Jenny Jaeckel